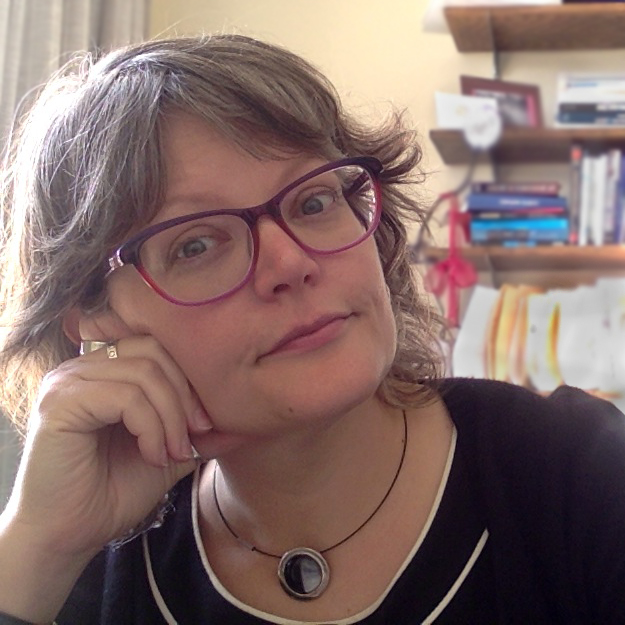 DAWNE MOON (Ph.D., University of Chicago, 2000) is Associate Professor in Social and Cultural Sciences at Marquette University and author of God, Sex, and Politics: Homosexuality and Everyday Theologies (University of Chicago Press, 2004). She earned her Bachelor’s (1991), Master’s (1994) and Doctorate (2000) degrees in Sociology from the University of Chicago, and studies how social power works through meaning-making processes, particularly in the areas of religion, gender, and sexuality.

I came to study religion and sexuality as I was considering dissertation topics, realizing that one of the questions that really puzzled me was why anyone would care whether someone else were gay or not. I decided to study homophobia, and realized that I would need to study a context where people were really grappling with it, and not just tossing around sound bytes. Churches became that site, but it wasn’t until I had been conducting participant-observation for a few months that I realized that I was actually studying religion! After I published a few things from that dissertation project, I decided to examine how that mix of collective self-definition, social power, and emotion looked in a controversy where I myself (as a self-identified queer raised in a Christian church) was not so central, so I spent several years interviewing American Jews about their views on Middle East politics. In the course of that research, I came across the intergroup “dialogue” movement and the writings of Martin Buber on relationality and dialogue. This combination of interests—religion, sexuality, gender, social power, emotions, intergroup dialogue, and relationality—all came together when I learned that there was a movement happening among conservative Christians, evangelicals and fundamentalists, to rethink the way they’ve been handling sexual and gender variation.

More specifically, my project with Theresa examines the movement among conservative Protestants to open conversation with LGBT people and for some, to make conservative churches affirming of LGBT identities, same-sex marriage, and alternative gender expressions. I learned about this topic from a family member, a conservative Christian who contacted me when he decided to devote a season to study and reflect on what the proper Christian response should be to LGBT people. We began an email correspondence; I sent him a few articles that had shaped my thinking about sexuality, as well as one I was working on myself. He sent me links to commentaries by conservative Christians who had changed their minds on homosexuality. What I read blew my mind, and I dropped all of my research plans to take up this topic.

Part of what we are doing is to articulate the harm done to LGBT Christians when their parents, clergy, and friends demand that they constantly experience shame about their sexual or gender difference. It is tricky to do, because they are in a context where shame helps people to be better people, to thrive and to allow those around them to thrive. But in this case, shame has completely opposite effects. Instead of thriving, it is poisoning people, because sexual orientation is not just about what people do sexually, but about how we relate to others (in this case, other people and God). Being forced to feel shame over the way one experiences love—by the very people whose role is to teach you about love and to love you—truly messes with people. Theresa and I have both been amazed by how people overcome all that “mess” and emerge not only with their emotional health restored, but with their faith intact.  I dropped religion completely right around the same time I came out as bisexual in high school in the 1980s—actually, I dropped religion completely when I read Durkheim’s Elementary Forms of Religious Life in my first year of college. But the people we’re encountering can’t drop their faith, because it is what their life is about. Their faith is not only what helps them to heal and be able to get on with life, it is what helps them to actually change minds and make headway as a movement, in places the secular LGBT movement has failed to make any progress. Another thing that really intrigues me is this movement’s potential to create a movement for social justice that overcomes some of the problems that other social justice movements have, by emphasizing grace, humility, compassion, and love, Christian values that I am now, for the first time in my life, starting to see the actual effects of. Before, those terms had really seemed like hypocritical slogans uttered to manipulate people. They still can be, no doubt, but I have actually experienced another form of Christian love coming out of this movement, a form that is truly unconditional, that inspires me as a secularist to want to share it with other people, a form that isn’t about trying to force someone else to fit into the speaker’s script, but that is actually other-focused. It seems to me that not only does these people’s faith give them the hope and duty to keep working for justice, but that their capacity for grace and forgiveness can actually build the movement, whereas so many left-movements destroy themselves by driving people out with constant shaming, self-interest, and boundary-patrolling.

I met Theresa within my first few years of teaching at Marquette. We knew we had some research interests in common, so we met for coffee one day just to hear about what each other was working on. When I got notice about the SMV Project, I started trying to think of someone to collaborate with. I usually work alone, so I didn’t really even know how to collaborate. I remembered that Theresa studied spiritual violence, and that seemed germane to the topic. As we worked together on the proposal, it became clear just how generative this collaboration could be. We started to see some profound resonances between our areas of research as we worked to synthesize our thoughts into one proposal. In fact, it was practicing our presentation for the Interdisciplinary Moral Forum last year—over and over—that I realized, “Wait a minute! I thought God hated me when I was growing up! I am actually a survivor of spiritual violence!” That sense of being hated wasn’t just about being queer, but about a lot of things. That made it crystal clear to me that people’s sense of God is shaped by their relationships with others—and when the love they get from other people is conditional or abusive, that can affect how they understand their relationship with God. What is particularly interesting, though, is that some of our respondents never doubt that God loves them and is perfectly delighted with them, even when other people are abusive.

Our research on conservative Christians’ move to embrace LGBT people pulls together the sociological threads I have been following throughout my career—how people, collectively and individually, answer questions like “what does it mean to be us?” and “how do we achieve the good?”; how social power works through emotions and language; and how the so-called “culture wars,” which have existed in rhetoric far more than reality since the term became current, may be actually coming to an end. As a sociologist, my job is to show how large-scale social processes shape individuals’ lives and choices, and here, we can see these processes actually transforming right before our eyes. People can tell us exactly what it was that made them change the way they thought about God, politics, and how to achieve the good. We live in interesting times.